Recently, the Hog Roast Watford team were hired by Nick who was organising a local Youth and Mini’s awards night for the Chess Valley Rudgy Club. The evening was a great event for the local community and took place on Friday 10th May. The event was being hosted at their base at the Croxley Guild of Sport in Croxley Green, Hertfordshire. The food was served outside and luckily the weather held out for the event so they had a sunny evening. The food was served as a buffet to the guests under a grand marquee. 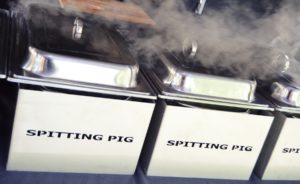 featured a whole slow roasted pig, cooked to perfection in one of the team’s Hog Master machines. The meat was served with the traditional sides of homemade stuffing, apple sauce and crispy crackling. The team also served bread rolls and wraps with the slow roasted meat. The Hog Roast Watford team also served a vegetarian option of lightly grilled and vegetable halloumi skewers with pitta breads and a tzatziki dip to ensure that there was something for everyone on the buffet table. All of the food was prepared, cooked and served on site to ensure that all of the food tasted really fresh. The team also sourced all of their ingredients locally to ensure that food was full of fresh flavour.

The Hog Roast Watford team’s Catering Manager, Martin, led his team through a successful service and was really pleased with the food that his team laid out for the guests. Martin did a great job of professionally carving the meat for the guests and he ensured that all of the food was seasoned perfectly. The buffet was served for the evening service from 6pm onwards. The buffet was served to 100 guests so it was important that the team made plenty of food to serve to all of the guests. Everyone appeared to really enjoy the food, especially the children. The buffet looked really colourful with the additional of the vegetable wraps and the selection of sauces which had been laid out.